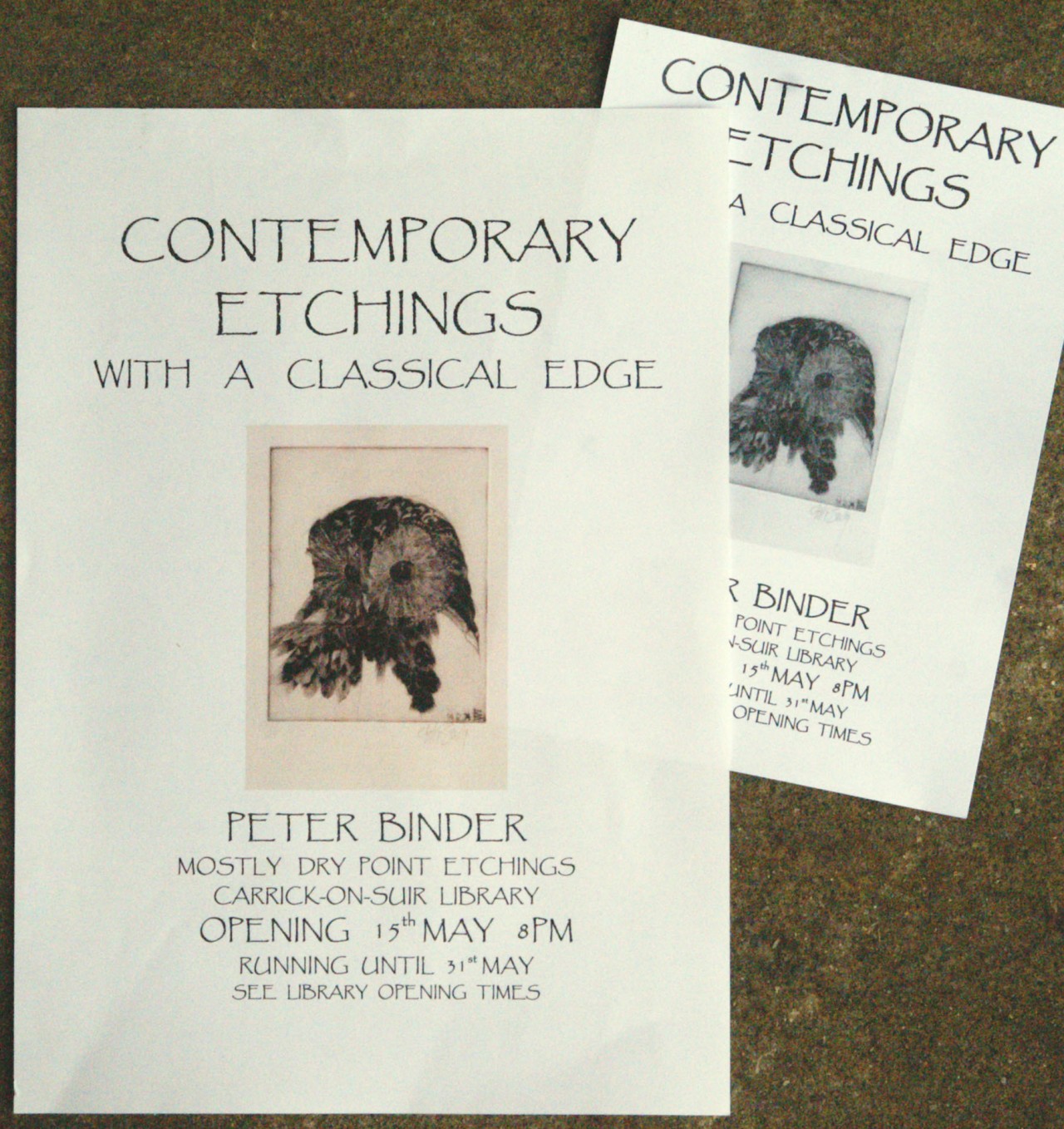 A summing up of my Thursdays’ printing activity during last year in KCAT Art & Study Centre (see links) this show presented all the resulting dry point engravings ( or -etchings), but I let most of my other prints, recent or not, “tag along” so to speak for a bit of variety.

Consisting of lithographs, lino cut, aquatint, and of course the engravings, they can be accessed here on the prints page along with a basic explanatory leaflet dealing with the process of dry point, mostly.

Then, this is probably a good place to thank Martina Coady for taking the trouble to open the show for me!  – and causing anxiety for herself by accepting the job.  Not forgetting  the very helpful and accommodating library staff in Carrick-on-Suir.

SOME SAY, THERE’S NO SUCH THING AS COINCIDENCE…..

I have a  faulty warning switch for the engine oil in my van that usually sets off the alarm’s squeal about twice until the engine is warmed up every time I turn on the ignition.

Like the shepherd lad that shouts “wolf” once too often – nobody pays attention anymore.

In fact I would notice if the damn thing DIDN’T come on when turning the key, so used to it am I, and the oil check simply has to be remembered as during pre-alarm times.

Now, the complication for the benefit of this story arises from a simplification: the cleverly stream-lined system of employing the one alarm for several functions: the same trouble-indicating squeal ( it’s not a beep!)  as for the oil sounds for brakes, coolant or fuel if triggered anywhere there.

I knew Diesel had to be filled up shortly, but with an alarm, no need to worry. I’ll be reminded.

In the afternoon before the exhibition opening I had unexpected personal business to see to in Kilkenny, the nature of which I won’t forget in a hurry.

On the way back from Kilkenny I didn’t hear the alarm.

I ran out of fuel on the way to Carrick, despite noticing the fuel gauge again on leaving home, this time topping the red, full sure I’d make it.

It’s always good to be early for these occasions…..

Biscuits, crackers, milk and coffee, my own apple juice,  bowls and some plates as well as reference material and a folder full of unframed prints had promptly been put in the van on arriving back from Kilkenny.

So I found myself locking all that stuff into the van left beside the main road at the entrance to a house a bit further than half way to Carrick to go asking for a sup of Diesel.

The very helpful owner of the place offered to empty his spare petrol container into the tank of his own car to have a vessel for Diesel from the filling station he was going to drive me to in town.

Before doing exactly that, I tried my luck with the borrowed gallon at the next house to save him the drive:  no Diesel either – but a customer from my vegetable stall who turned out to be the photographer covering my exhibition for the paper…. in about an hour’s  time!

And then, as you would expect during the short spin to get Diesel and back, my Samaritan wanted to know about my show in the library. What I certainly didn’t expect was his long standing interest in the topic and being in the possession of 16th century Japanese woodblock prints, offering to show them to me some evening over a glass of wine!  I was grateful in every way.

Now, the owner of the filling station I happened to know before, as I supplied that family’s organic Christmas turkeys in recent years.     However, there had never been any reason to mention etchings or prints of any sort, but after having crossed that bridge by telling him what just happened me,  that man wants to show me his original M.C.Escher prints he told me he bought in Holland.       In Den Haag, if I remember correctly.

Perhaps, after seeing what came of it, I don’t care anymore that I haven’t been able to locate the exactly correct oil switch – new or otherwise – for my van engine, though it would alleviate the hassle over the annual DOE testing for commercial vehicles….. .

I haven’t gotten around to seeing either set of prints yet. The Japanese woodblocks or Escher’s.

But I have all intentions to do so,  coincidence or not.