As part of the Fringe events during Kilkenny Arts Festival in August 2011 I was able to avail of what turned out to be a perfect exhibition space on Dean street. The presence of mind of a fellow Swiss man who’s lease on the mentioned location was up the week before the Arts Festival kicked off, combined with the land lady’s positive attitude, led to the venue.

Part retrospective, the show brought through its layout into close proximity the oldest piece, a dry point of a tawny owl dating from 2 weeks before my 16th birthday, to the newest, tissue paper collages of the first two “Underground” pieces ( prints and Underground series pages respectively ). Having engaged “artistically” only in an erratic and haphazard fashion between 1983 and 2009, the exhibition bridged  a considerable time gap, that led through comparison to speculation on change – stimulating musings on the human condition – my particular form of it anyway….

My initial apprehension concerning the lighting in the place proved utterly unfounded. In fact I was asked several times during the week-long show by different visitors whether this place had always been a gallery!

Thanks are due to Urs Tobler, Breda Malone and Saturio Alonso ! 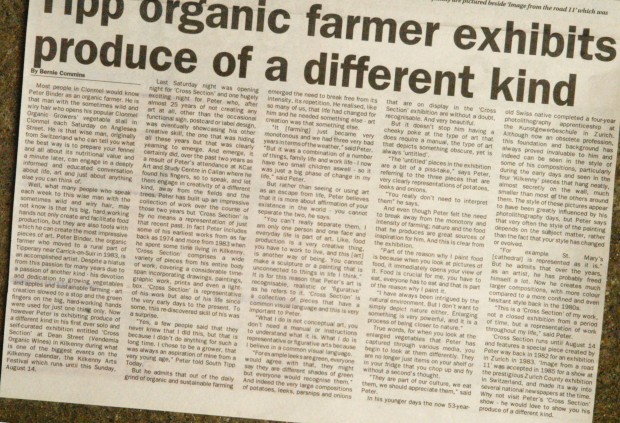